Howard League was born and raised in Quincy, Massachusetts, the only child of Howard and Carol League. He attended public schools and graduated from Quincy High School in 1969. He is a graduate of Northeastern University where he earned his BS degree in Secondary Education majoring in Biology and English Literature. While teaching High School Biology at Cohasset HS in Massachusetts, he met his future wife Anne Marie McGann who was also teaching at Cohasset HS. Anne Marie is the niece of Bishop John McGann of the Rockville Center, Long Island, New York diocese. They were married on August 26, 1978 at St. Thomas the Apostle Church in the McGann family’s hometown of West Hempstead, Long Island in a ceremony presided by Bishop McGann. They purchased a home in Pembroke, Massachusetts that was their residence for 39 years. During most of that time, Howard owned and managed a business in Weymouth, Massachusetts. Anne Marie and Howard have been blessed with a daughter Kathryn and son Michael. Both children are married and the family has grown with the birth of Erin Davis on January 22, 2017.

Howard was ordained on September 17, 2011 by Sean Cardinal O’Malley, Archbishop of Boston. Soon after ordination, he completed a Masters Degree at Boston College in Religious Studies and Theology. He was assigned to his home parish of St. Thecla in Pembroke, Massachusetts that remained his only assignment until moving to Delaware in November, 2017. In addition to his role as parish Deacon at St. Thecia, Howard also accepted the job as DRE for that parish. Howard was assigned to St. Jude The Apostle in March, 2018. 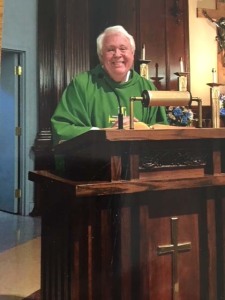